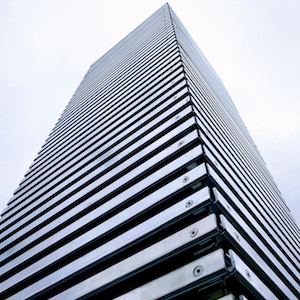 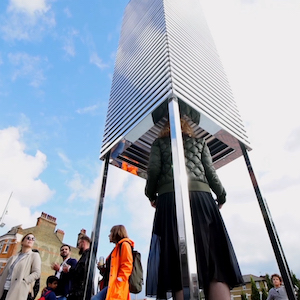 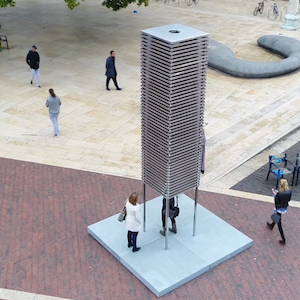 London based design collective AWMA ambitious proposal for the Brixton Design Trail district of the 2017 London Design Festival is a public art installation that takes the traditional concept of a minaret and flips it and clads it in mirrors. This activates the ground making it accessible for individual reflection and replaces the vocal call to a visual call for congregational gatherings. The internal experience of the minaret is enhanced by spatial geometry, whilst externally reflecting its ever changing context.

The installation is called the Hubb, the Arabic word for love, which is derived from the root word seed. AWMA describe the concept as just like a seed, love needs to be nurtured in order for it to grow. The nurturing of a community is vital in order for it to flourish. In the Islamic community the mosque plays the role of a hub and traditionally the minaret is an architectural device that facilitates a person at the top, calling the local community for individual reflection and congregational gatherings. The Hubb will become an integrated metaphor of the power of bringing a community together in congregation, and in solitude, in sharing and in reflecting.

Format were responsible for the structural engineering for the tall thin piece. From the outset the major challenge was to give the impression of a floating and shimmering structure of very thin layered sheets or reflective material. Our design used stiffened aluminium plates turned up at the edges and carefully fixed to four narrow square section columns to create a stable moment frame. Much thought was given to how the structure could be assembled from prefabricated elements without the joints being seen or if they were then how they should be beautifully detailed.

The work attracted huge interest from the local community and because of the positive impression and public demand it was in place for far longer than the allowed two weeks.