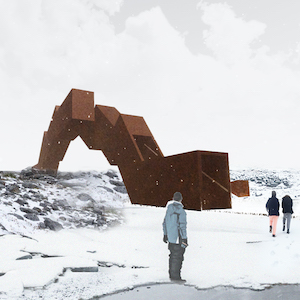 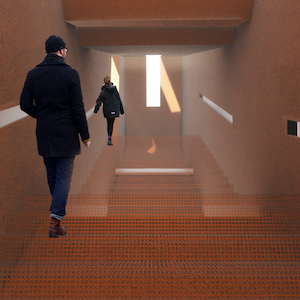 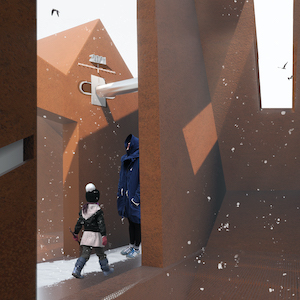 Our entry for the Grjotagja’s Cave tower competition in Iceland was a pair of cantilevering pre-weathered steel footbridges meeting over a natural fault line between tectonic plates.

The planet as we know it today has been formed by years of slow geological transformation. The oceans and the mountains are the results of those. Science has identified seven major tectonic plates as the drivers of that change. Iceland is a unique country sitting on the border between 2 plates; the North American plate and the Eurasian plate. It’s in this liminal zone between these that we can find the Grjotagja’s Cave. Bilanalina is inspired by the notion to create a link, a bridge, a span to cross this border, inspired by earth movement and inspired by a human need to make connections and to cross the metaphorical and physical gap between communities. The cave sits on the border between two tectonic plates. There are three different types of border depending on relative movements between the earth’s crust. This particular joint is described as Divergent. This is the essence of the creation of oceans, process, a slow and inexorable movement. The asthenosphere comes back to the ground surface pushing the lithosphere and the crust away from each other. It’s the combination of two movements: Vertical and Horizontal. By using Corten modules the project follows this divergent movement to create different elements projecting out of the ground. Our idea was to create an exploring path to experience first hand all levels of this unique geological terrain. Corten is a grounded material that sits in the environment, weathering in a natural way, in harmony with the elements and which becomes a living part of the site, its character and tone giving a visual continuity with the surroundings. Thanks to those dynamic modules the project is defined by different zones on the site and around the cave. We also propose a footpath that allows the visitors to have different views on the surrounding landscape. From the entrance the visitors can see blocks of corten projecting from the ground giving different visual cues and glimpses of the many different experiences on the site. They will start their journeys by a gate that will give them the information they need to appreciate their time in the cave. After that the first stop is the entrance to the cave itself. This will give access to a staircase descending underground where the visitors will be able to enjoy the beautiful water. They can come back on the surface and take the path to the bridge tower. This is the physical link between the American plate and the Eurasian plate, but it’s also a pinnacle, an observatory, a tower or even an immersive art experience. Due to the shape it offers different windows and views for the visitor and enables a sense of focus and contemplation. At the highest point of the bridge the visitor then crosses a mesh platform localised on top of the physical existing break. On this platform the people will be able to see a sliding joint between the two halves of the bridge. The joint is a visible reflection of the movement of the earth since the installation of the bridge link as it will slide away from its original location as the time goes and the break under open. Once visitors have crossed this border, crossed a point of great and epochal change, they can continue their path to the cafe. This allows the visitor to rest in a mid underground space that gives him a view on the earth surface. The path continues on the site with different areas giving the visitors the chance to explore and finally a simple bridge to cross again and finish the journey. Bilanalina is a project that wants to coexist and create a dialogue both material and metaphysical with its environment in order to educate, magnify and celebrate a unique physical environment and to give a message of union.