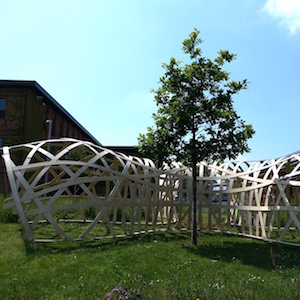 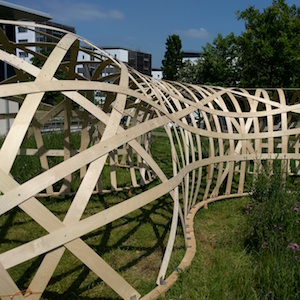 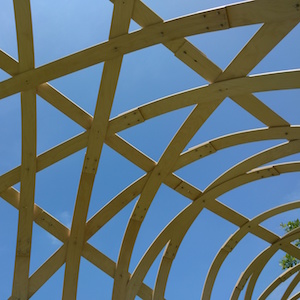 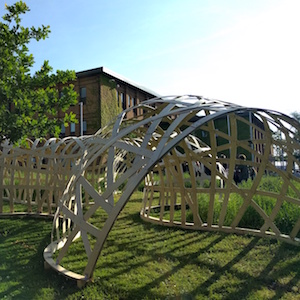 The UWE Pavilion is a type of ‘bending active’ timber gridshell. Although typical structures attempt to avoid bending behaviour, bending active structures instead utilise bending to give rise to form.

A doubly curved surface to suit the site constraints was defined parametrically (using Rhino/Grasshopper) and then used to derive a set of primary laths based on geodesic lines. Secondary elements were then woven around these primaries, again by generating geodesics. Finally, splice points along the laths were located, with the final geometry the exported for detailed design. We used our self written K2 Engineering components within the Kangaroo2 physics based environment in Grasshopper to simulate the non-linear behaviour of the structure and to investigate the post buckling response.

The use of birch plywood was essential to achieve the bending radii whilst still retaining the required shell strength at such a thin depth. The fact the shell could be made from such thin plywood (6.5mm) also meant material use for this size of enclosure was minimised.

The pavilion shows what can be achieved with computational design techniques when using traditional low cost and low-carbon material such as timber and relatively simple fabrication techniques as a constraint. The final result points the way to similar thin shell structures with bending active elements that do not require additional process such as steam bending (text by University of West of England)